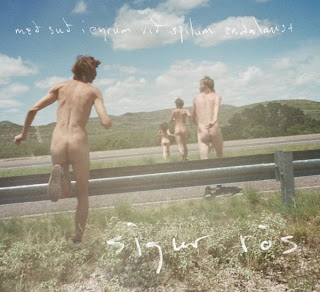 Sigur Ros announced that they have a new album out at the end of june. They released the first track for download yesterday called 'Gobbledygook'. It sounds nothing like Sigur Ros normally do, acoustic, spontaneous and playful. It's a grower, but it's a great track and if the rest of the album is as good, 'med sud i eynum vir spilum endalaust' (with a buzz in my ear i play endlessly) is going to be the album of the year by a mile.

The artwork is interesting, as you can see. Lots of bottoms. The video for gobbledygook runs in the same theme but there is way too much nuddiness in it for little old me. I'll stick to the sound. The theme makes sense in some ways when you hear the song because it really does sound like the band is shaking off a lot of formality in their music. It's a much more 'naked' sound.

I don't have a problem with nuddiness in art. The human body is a beautiful thing, especially when artists represent it honestly and challenge the airbrushed preconceptions of the world around us. But, you know, everything in moderation.
Posted by the travers family at 1:28 pm