Alex is working this week, but i am not, and so I am gallivanting around Plymouth doing lots of cultural things like watch opera dvds, visit places Ive never been before, watch the new Simpsons movie and read the new harry potter to alex before the end of the week. We're around 430 pages in.

Here's a photo of plymouth that i took from the top of mount edgecombe where I went yesterday. 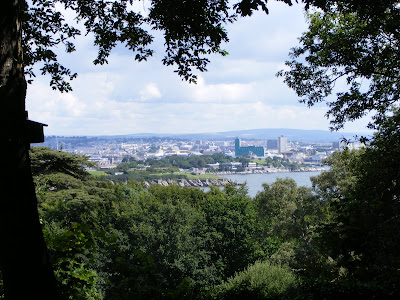 I wanted to take some more pictures today when I went to Tavistock for a lunchtime music recital, but you can't take pictures of Tavistock in the rain. And you can't buy cheese from the cheese shop either when your wife is off blue cheeses. Still the music was good.
Things I have learnt so far.
1) I prefer italian opera to mozart, but I prefer cosi fan tutti to the magic flute, which is rubbish.
2) In legend, Cornwall is named after Corineus. A trojan hard man who was a follower of Brutus, allegedly the first king of Britain, back in the 12th Century BC. Known for his amazing fighting abilities, Corineus proved this best by fighting a 12 foot giant called Gogmagog in Totnes, and then carrying him to the sea and chucking him over a cliff.
3) It's possible for men to sing alto, but it's also pretty weird.
4) The house at mount edgecumbe was bombed out in the second world war, and rebuilt by the Earl of Edgecumbe in a georgian style, for no other reason than he thought it would be nice.
5) There is an amazing amount of stuff to do in the Plymouth area if you look for it.
Posted by the travers family at 3:43 pm