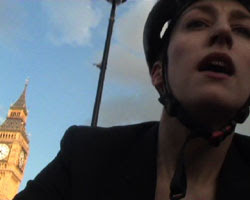 Continuing the blog from earlier in the week on the joys of Culture Week...
Yesterday, we went to the Pl:ay festival in Plymouth which was a set of live art exhibitions and video installations, connected to the city's college of art and design. The picture above is of an artist called Jenny Hunt, who displayed a video called 'Another Brick in the Wall'. This video was of her protesting against (stupid) government legislation that stops people from protesting in parliament square. So she rode round and around parliament square on a bike singing cliched protest songs like war and road to nowhere and do they know it's christmas until the police stopped her.
Also cool were Low Profile. They are a local live art group who are excellent and we will put a link to their site on the blog soon. They did a one hour performance called 'show for you' about how we behave when we're on our best behaviour and trying to impress people with a first impression. It was lovely.
Today, we did a double bill of movies. The Simpsons movie and Transformers. Both were very enjoyable. Back to work tommorow.
Posted by the travers family at 6:30 pm