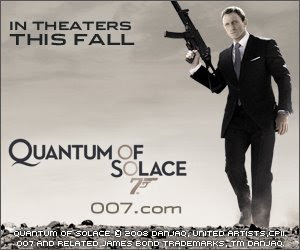 We went to see Quantum Of Solace on Monday night and I wanted to blog some thoughts about it. I'm not sure how good my sensors are as to whether this was a good film or a great one due to the fact that it was our first time at the cinema in over a year. The actual act of eating popcorn and making jokes about local adverts and just being there without the boy was a little weird, and meant that we were probably always going to love the movie.

Secondly, as a disclaimer, I have a very low threshold of quality when it comes to bond. I am of the bank holiday + bond = must be watched even if it's moonraker point of view. So again, I was always going to like this movie.

I liked Quantum of Solace. I can see why some people are criticising the movie, but i think that all those criticisms are answerable and therefore not necessarily making for a bad movie.

So does it work to have a bond film that is so close a sequel? Maybe. You definitely have to have watched casino royale to get what is going on in this film. It would be better to think of it as a volume 2 rather than as a discreet story.

Is it too much like Bourne? The filming style is very bourn-esque, especially on the action sequences. I don't really have a problem with that. HIGH FALLUTING BOND THEORY ONE - One of the most significant reasons that we still all watch bond movies is because they act as a cultural hall of mirrors. They take trends and tropes and tap into the emotional undercurrents of our times and reflect them back to us in a gaudy glamourous way. You still feel like you are in Bond's world rather than Bourne's as the car getting wrecked is an Aston Martin and so on. This is added to by the referencing of previous bond films. I counted references to The Spy Who Loved Me, Goldfinger, The Living Daylights and I'm sure i missed some.

Is it too one paced because it's action all the way? Maybe, but to me this is justifiable in setting up the Quantum organisation. The first thing we find out about them is that they are everywhere, therefore it shouldn't be a surprise if everywhere Bond goes, they are waiting for him and look to kill him. It's part of having a more vulnerable bond that the odds are stacked up more against him. In the 21st Century, it appears that the henchmen of evil have done more than basic training.

All this ties into what i think is the most interesting theme in the whole film which is that Bond is an agent provocateur rather than a secret agent. HIGH FALLUTING BOND THEORY TWO - the key to the action of Quantum of Solace is based not in Bond being a young or naive agent, but in him being an agent who has a moral centre where some people are good and some people are bad and something must be done about it. However warped it may be, Daniel Craig's Bond is about justice. This is what makes Bond relevant in a post 9/11 world. We get the world of secrecy opened to us in this film as thoroughly amoral. Quantum, elements of the CIA, and dictators co-operate for what they perceive as mutual benefit without any hint of ideology or agenda beyond control and finance. Bond in this world becomes a bull in a china shop, full of vengance and wrath and anger.

The style of the film comes from the message, there is no messing with this Bond, no quips or asides, because he is too focused on his 'just cause'. For the viewer, the message is that within a complex world of international power and control, there is still good and evil and it's good to be on the side of good. The film implies that the perpetrators of Abu Gheraib and 9/11 are linked, both levers being pulled by a wider network of control. Whether you are a conspiracist or not, this film denounces both the levers and controllers and suggests the way to deal with them is to give them all a good old fashioned kicking.
Posted by the travers family at 7:29 pm

The first time we went out without children was to see King Arthur at the cinema, and that still didn't stop us thinking it was rubbish, despite Kiera Knightley's fine acting performance...