Our odyssey this week.

Hi to anyone reading. Sorry there has been no posting for the past few weeks. Has been entirely too busy.

To give you a sense of how busy we have been, let me tell you about our little odyssey this week. On Wednesday, I had my interview for probationary status as a minister for the church, which was in Taunton. So, we decided that we would go and see alex's parents and my mum too and then come back the day after.

So far so good, except we have a car which has been a bit dubious in the radiator department. We've been crusing up and down the a38 for the last few weeks/months at 60mph max, which is ok.

We managed to get as far as taunton ok, but i started to worry when going to my mum's that we were struggling to get to 50 on the motorway. So we pulled off and realised at street that there was virtually no water in the radiator. We prayed up the hills of the mendips and limped home for the night.

The next day, coming home, we tried to patch up the radiator with some radweld and more water. Cutting a long story short, it didn't work. it took an hour to get 25 miles down the road to yeovil, and then we were going at 40mph in 5th gear and the car was telling us we were massively overheating. We pulled in at cartgate picnic park.

As patrons of this park for a good 3 1/2 hours, we can thoroughly recommend its facilities. We called out the rescue people who said we were going home in a recovery van. And it took us 7 hours to get home from somerset!!! While we were at the picnic park we had to find some way of entertaining rocky, so we got out his play pen and put it in the middle of the park, as you can see below. He liked this, although he didn't want to sleep in the way we wanted him too. 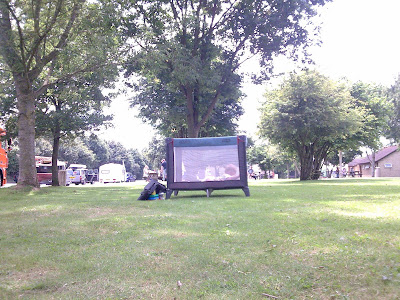 Posted by the travers family at 6:41 pm