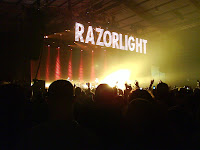 Now, we don't get a lot of opportunities to see gigs anymore. This is mostly because most of the bands that we like don't really bother to come down as far as the westcountry when they are touring. Plymouth has a good arena venue in the Pavillions, but nothing smaller that is any good. So, it was with great delight that we went to see Razorlight on Friday night in Exeter. We went because the tickets were Alex's christmas present. 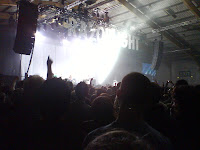 Alex has 'got' Razorlight a lot quicker than I did. I spent a lot of last year wondering what all the fuss was about 'America'. However, they are a great live band, much better live than on record. I think the thing that makes the difference is the drumming. Their drummer is like animal on stage and they just have way more energy for it. It was also a surprise to see that there was a proper light & stage show, not just the band. It was all very high tech. (not like in my day =)


The support band were called mohair. They reminded me of the second generation of britpop acts in the mid 90's who got were on the back of the bandwagon and got slaughtered by comparison to the likes of Blur and Pulp. They were ok, but they made you realise why people get so excited by the Fratellis. 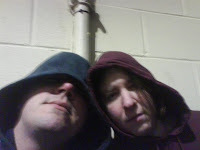 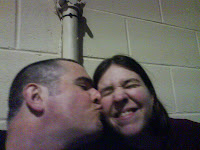 We had a lot of fun on Friday. Even if it did take us 45 minutes to get out of the car park afterwards. Felt a bit ironic seeing as the band were supporting the Big Ask climate change campaign. So we switched off the engine when we were really going nowhere.

Here's a video clip of the band playing America. We were fairly near the front for most of the set, but near the end, I needed the toilet and Alex needed a stretch, hence the very far awayness of it all.


Anyway, here's to more good bands playing in the west country, and us getting organised to buy tickets.

Simon
Posted by the travers family at 4:26 pm